Twas the night before Christmas, and all through the net not a disk drive was spinning, not even in the cloud.

The ads were hung by the SERP with care in hopes that conversions soon would be there.

The Keywords nestled all snug in their ad groups while visions of eligibility danced in their heads.

When out on the net there arose such a clatter I sprang from my Surface to see what was the matter.

And what to my wondering eyes should appear but Saint Google and eight AdWords Engineers….

The Engineers sprang to AdWords and opened the code exposing the luster of embedded objects below.

The code flew with such fury that smoke arose from the CPU as new features flowed from alpha to beta to production release.

Saint Google sprang to his sleigh, to his team gave a whistle, and away they flew, but I heard him exclaim, ere he drove out of sight.

“Merry Christmas to all, and to all a good night.”

Since 2008 we have written an open letter to Saint Google and we believe that Saint Google reads our blog because we get lots of things that have been on our lists. Regardless, we find this to be a fun tradition for a company that eats, lives, and breathes AdWords.

AdWords is a very robust system with lots of functionality so coming up with new things is harder than you would think but here goes. Please feel free to add to the list by commenting on this blog. 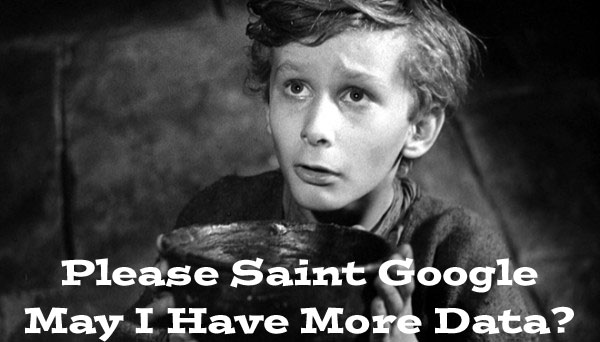 This has been on our list for a very long time and we are stunned that it has not been done yet because the upside benefits Google financially. Maybe one of these days Ruth Porat, Google’s CFO,  will read our blog and realize that Google is leaving billions on the table. The idea is simple – as most great ideas are. When an AdWords Account drops a search because of a negative keyword it would go on to the Negative Search Query list with the query, keyword match, negative keyword, and source level (MCC, Account, Campaign, Ad Group, or List). Advertisers would then review this and find ways to pick up traffic that they now exclude by mistake. Negative keywords are a powerful feature of AdWords but with great power comes great risk. Negative keywords can be a silent killer of traffic because you never see what you are excluding. I will bet Ms. Porat, that this change could result in over a billion dollars in Google revenue and I would like just a small percent (Think Tiny Tim’s voice from A Christmas Carol – please sir may I have some more). The surprising part of this is that Google benefits and the hook is already in the code. Right where the negative keyword is applied to the eligibility test, can you see it? We can! Save that data and let the cash registers ring in the new year!

Keywords are the core power of AdWords but they can often be difficult to control. What we would like are keywords with better control. Today we have broad, modified broad, phrase, and exact but we want more. We would like to see a keyword where we can specify some parts  broad with others as phrase or exact. We would like to see coding that would allow us to extend words with plurals, stems, and full broad matching. We also want the ability to extend this with keyword lists so we can stop putting the same keyword into the keyword list multiple times. Here is an example of what we want:

In the qualifier list we could put things like emergency, 24 hour, etc… and in locations we could put all the local cities and from this one keyword we would get all of these keywords. In the keyword lists as in the keywords we would have broad, modified broad, phrase, and exact controls. In the above example the * is followed by the name of the list.

Give us back Phrase and Exact Keywords

In the past ‘exact and phrase’ actually were ‘exact and phrase’ and we would like this back. There is a difference in some cases between single and plural. Since strict matching application is a minority of the cases this could  be a flag on the keyword. We will forgive Saint Google for regifting.

Responsive ads are great but did you notice that with them Google took away an important control? It was kind of sneaky so if you missed it that might have been by design. In the olden days you could create image ads and run them separate from text so you could bid differently. The reason that we liked this ability is that the text listings are much lower value to many clients, so mixing text and image has always been against our internal best practice. We would like control over which formats run so we can turn off text and run them separately.

Responsive ads get rendered into many formats but the preview tools only show a few examples. This results in us finding formats out in the market that are not up to our standards. We need the ability to turn the different formats on or off while reviewing all possible formats.

Within AdWords we would like to patch data to fix known errors and to remove misleading data from the analysis. Errors come in all shapes and sizes a common one is a conversion code installed on all pages of a website resulting in a huge number of conversions. We would like to be able to fix this with a data patch. Ideally this would be applied at the most detailed level and then rolled up by the system. Ask any Data Scientist and they will tell you that patching data is one of the first things they have to do for almost any project and they spend more time doing this than any other process. Patches have to support averaging, replacing, and time removal. When viewing data in graphs it will be important to know that a patch is being applied to the data.

Closely related to Data Patching, annotations should work just like they do in Google Analytics. We should be able to put a note at any level and across any time frame. When displaying data in graphs it would be great to see indicators of the notes.

We would like to know that when an ad got an impression when the domain was also in the organic results. This would be a separate counter in the database and dividing this by the impressions would give you your organic support percent. It would be amazing if they also gave us the organic click but lets save that for next year. We would not want Saint Google do think we are greedy.

Part of this is already in the Insights but this would extend insights to the keyword level.  What we would like is to be able to code competitor domains with a ranking from don’t care to we hate them (think 0-5). Then have the system aggregate the competitor level in the keyword. Since it would be aggregate data it would not disclose the specific competitors but the advertiser would be able to change the weight.

Allow exclusion of traffic known to be advertisers on the same words. We would like to be able to put in a domain and exclude any person known to be associated with that domain. AdWords accounts are associated with domains by the URL of the ads and with that association are email accounts that maintain that AdWords account. If that person searches we want to exclude our ad from showing. If it is not excluded we would want the fraud filter to pick this up and remove any clicks from that source.

Repeat clicks and impressions are when the same user clicks on an ad more than once. We all know that searchers perform similar searches and return to websites more than once often through ads. This would be similar to the new visitor data tracked by Google Analytics but broken down by keyword, ad group, ads, and campaigns.

Quality score history is a newer feature and it’s a nice start but we want more. We want quality score reported with the same history detail and dimensions as clicks or impressions. It would be great to see how Quality Score tracks as we make other changes to content and ads.

Here at SMS we’ve been diving into Data Studio to better report back to our clients on the performance of their account. It’s amazing all the data we can report on in Data Studio but for some reason we cannot get Quality Score to report. Now that Google has recently launched Quality Score history, we would be able to see long term trends in that data.

In the last year or so, voice search has becoming much more important to marketing strategy. Starting with Siri and followed by Alexa, Google, and Cortana, voice search is everywhere and becoming more common with every new version of home assistants. We would like to see voice broken out by dimension like mobile, tablet, and desktop as well as detailed in the search query reporting.

Saint Google is REAL and we believe!

Like most omnipresent beings it takes some faith to believe in Saint Google but here at SMS we believe and we hope Saint Google is reading. Nobody knows if Saint Google is male or female or what race, creed, or color but faith gives us the ability to look beyond what is easy to prove. As a group we proclaim that “We Believe”.